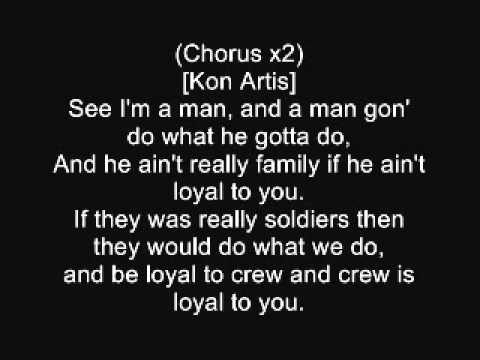 [Swifty McVay]
You don´t me, McVay and I doubt if you understand me
Why would I give a f*** about you if we ain´t family?
I roll with a chosen few, and those of you that´s behind me
Witness the most potest´ furocious niggas that rhyme
These bitches turn they back on you, actin´ like they ain´t did shit
When you rappin´ never mix bussiness up with your friendship
If you lackin´ up in this jungle, then what you breathe fo´?
niggas don´t love you, you got habits of breaking street codes
Far as static, I automaticly get medieval
When i´m after people, then i´ll explode you bitches with C-4
These hoe´s, have no insurance, bodies get repo´
Making you vanish even when we ain´t got our heat close
Keepin´ .44´s where you´re hoes are swallowing deep throat
If you owe me dough then you know you falling asleep, close
niggas pupils that´s what I do, i´m foolish will shoot you
Cuz´ i´m coo-coo, But I don´t think niggas can take in heat tho´

(Chours x2)
[Kon Artist]
See i´m a man, and a man gon´ do what he gotta do
And he ain´t really family if he ain´t loyal to you
If they was really soldiers then they would do what we do
And be loyal to crew and crew was loyal to you

[Bizarre]
I don´t give a f***, i´m quick to blaze chronic
Smoke on so much green, use twelves and supa-sonic
Bizarre pack guns and knives, put to dick to ´Nuns and Wifes
Now who the f*** want to fight?
Ain´t nobody f***ing with me, Ain´t nobody f***ing with the D´
They get beat like a M-P
You heard about Bizarre taking all them drugs
You heard about Proof wil´ing in the clubs
You heard about that nine that Eminem packs
You diss us, you get you´re f***ing face cracked
I´m from 7 Mile and stout, I´ll shoot up you´re house
Next day, i´ll pee in you´re mouth. .

[Obie Trice]
Aiyyo, loyalty´s first, all the bullshit second
I showed you on the record, Cheers to who respect it
Most of these niggas neglect it
Even though it´s a known method
From the hectic hood that you slept in
You wanna´ be an exeption
That´s when the weapon is leaving you´re half stepping
With that ´caine in you´re left hand
Obie from a section that´ll stain up you´re flesh and
Have you on bare breast
Questionin´ you´re affection for streets
D-Twizzie no question
One of the best groups that done it
And Obie is their reflection
Lil´ homey that know sowly that loyalty is reckin´
D-Twizzie fo´ life, Obie Trice is second. .

[Proof]
Which one of you niggas wanna´ be ?boltion? bump heads
When I got a passion for clappin´. . .with one hand
Talent´s on my roster this mobster´s in dump land
Send a gangsta to sleep two by two like bunk beds
Never leave the crib without packing my black burner
On some T. Ali rapper to merk a have murda
Incorporated, Hitman Harry is at you´re service
Reach for me one more gain´ and thats closed
For life as D12, no ice and spreewells
Every night that I chill in, I fight by free-will
Knowing I can be killed
Leaving my group, pieces of proof with a reason to shoot
And a liecense to ill
We lost Bugz and i´ll be damed if we loose another man from our clan
Without forcing our hand
Estorting you´re family, i´ll torture you´re granny
For my niggas, i´m on you´re motherf***ing porch with a ´Cammy

[Kuniva + Kon Artis]
Yo its funny how niggas get caught along (and get bombed on)
Knocking teeth in back of you´re throat (and break you´re jaw bone)
(I´m on ignorant shit) these niggas is bitch
Pass me a cigarrete quick (shit is finna´ get thick)
Yo´ man i´ll get split (by a brutal and critical hit)
With identical dent (or bullets with identical prints)
I´m wishing you if (you come you´re Lutenints a snitch)
You teminant fick (and we know you ain´t finna´ do shit)
I´ll stick with my clique (The Kon Artist Bomb Artist)
Kuniva The Rida´ (Shooting through you´re f***ing Long John garmets)
Dirty Dozen (We deep in the street)
Unbelivable heat, we´ll even lay you out infront of the chief of police
Muthaf***a´

(Outro)
[Kon Artist]
Yeah! D-Twizzie
D12, Dirty Dozen
Nothing but family up in this muthaf***a´
Loyal to everything that we do
You ain´t neva´ gonna´ catch none of us slippin by ourself
´Cuz we always together
You know what i´m sayin . .
Y´all niggas don´t know what family means
Bugz watching over our ass
Thats why we still alive know
Knocking yall niggas outta the clubs and shit
Haha! Runyan Av. Baby!
Shady Records!
Where yo´ mamma at nigga?