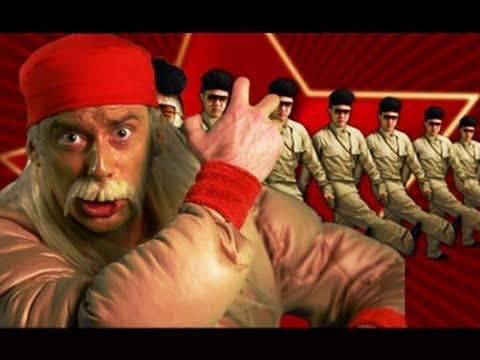 Kim Jong-il:
The name's Kim Jong. I got a license to IL!
Make you swallow my rhymes like a steroids pill!
Your body looks like a spray tan banana,
With a walrus mustache and a wack bandana!
I'm coming at you like the Asian Rick Flair!
Bitch, I'll suplex you by your friggin' dick hair!
Your whole fam's a bunch of Barbies, dude!
You want beef? Eat this Korean BBQ!

Hulk Hogan:
You got a ring side seat to your own smackdown, brother!
You look like Sonic the Hedgehog's mother!
You're a freak, a phony, a rice-a-roni jabroni!
I'm gonna bounce you like a check for my alimony!
Come on, dude! All the little Hulksters know:
I'll hang you from the ropes like a South Park puppet show!
I'll choke hold you hostage like Laura Ling!
Brother, I'll leg drop your ass back to Beijing!

Kim Jong-il:
Beijing is in China, you blond asshole!
I'm a god among men; you're a suburban commando!
North Korea, bitch! Let me give you a tour!
By the way, your wife says my dick is bigger than yours!

Announcer:
Hulk Hogan goes down!
I don't know if he can finish the battle!
He's reaching for the ropes!
It's…it's…Macho Man Randy Savage!

Macho Man:
Oh, yeah! It's about to get real!
Watch me snap into a Slim Jim, Kim Jong-il!
I don't like to hit little bitches with glasses,
But when midgets step up, I stomp midget asses!
The Macho Man, there is no equal,
So spend less time rapping and start feeding your people!
Punk! I'll elbow drop your whole nation
On behalf of the entire World Wrestling Federation!
Oh, yeah!