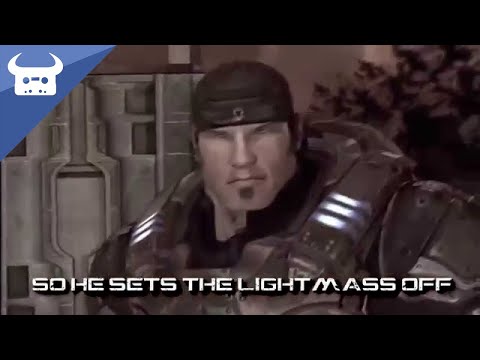 Emergence day emergency, thunder sounded
And a hundred thousand locust rose up from underground
The invasion managed to create a manic state of panic
They did damage and it made a devestated planet
Today was savage, the latest in a spate of clashes
Between invader and remains of man that came from ashes
See Marcus Fenix in Jacinto penitentiary
Dominic Santiago enters then he sets him free
To defend against the horde he brought all sorts of awesome weaponry
Bring all your forces forward, your corpser's dead to me
Him and Dom find Kim and Carmine and together they took
A look around for Alpha Squad to get the resonator
A sniper snipes Carmine right in the head and later
They catch the Cole Train and press on the accelerator
Seeders block the transmission, nearly stopped the damn mission
Is that the Hammer of Dawn that Dom is brandishing?
Every soldier's ambition is to fire one, a line of lightning
Striking right in from the sky, you're gone
Look, there's Baird and a couple of redshirts, hmm
I wonder which one of them will be dead first?
It can't be Kim, can it? that man's put in the legwork
Ooh, feckin' heck, I bet his bloody head hurt!
Now Fenix has seen this and he's pissed in extremist
But needs to just retreat quick lest he gets in deep shit
It's certainly evident he is ready to burn an effigy
But there is a mercenary berzerker lurking in the murk of every turn you step in
One of the perks of military work is getting to murder every enemy ever so cleverly
With the heaviest weaponry

As the planet plummets ever further into instability
The Gears receive a missive of massive responsibility
To take the resonator, in the face of all futility
And place it in the lethiaimulsion facility
Their aim is to make it to the makeshift bunker
The place where the stranded stay and take this junker
The stranded Franklin says that they can take the tank
But in exchange Cole and Baird must stay to aid the camp
So Dom and Marcus then head off into the darkness
They'll probably end up carcasses, but soldier on regardless
They watch the light and dodge the night using skill
Co-op, cunning and guile style to fight through the kryll
This type of thing takes balls, call it castration
Finally they make it through the horde toward the gas station
It's not quite right the way they use the spotlight
Nah, that kind of ingenuity is fricking godlike
Turning the torch on them, burning and scorching them
Arriving at the fort in time to support the slaughtering
Shoot the guys that aren't human, target neutralised
This brutal life will leave your psyche scarred and brutalised

With the mining facility in literal proximity
Their ride begins to give off signs of critical toxicity
It's like a syzygy between their fate and electricity
They're lucky the place has pedestrian accessibility
This utility is a subterranean fortress
So they fought hordes til they're deader than this corpser's corpse is
If it's the belly of the beast, the neck's an elevator
It'll need some rennie when they detonate the resonator
The situation's escelating so they'd better get away
The locust horde are gonna have to call a decorator
Ready to let it blow, they can clear the mess up later
But computer says "no, I couldn't get the data"
It's late in the day to call up technical support
But they've already put in far too much effort to abort
But thankfully Baird appears to be somewhat prepared
He found a map and plus just happens to have got it there
He's a proper COG, look at his goggles, hair, and general masculinity
That should be bottled, yeah
There'd be romance between us if he never had a penis
And anyway, his sights are set on finding Adam Fenix
One of the staff of the east barricade academy is-
As well as being Marcus's dad- an apparent genius
So they start for his lab with only half of the manpower they had
These COGs have gotta be mad

Humanity's panicking there's nobody left to save them
But wait - the COGs are dropping from the sky inside a raven
The finest specimens of homosapiens anatomy
Collectively heading to the east barricade academy
Their aim's to get rid of an alien supremacist
Go back to genesis but - hang on, there's a.. nemacyst
It's gone and shot them with spores, the chopper is lost
The situation's getting proper debauched
It started bad enough but now it's snowballed
They have to battle their way back into the mansion like Toad Hall
Which is a load more difficult than ABC
But luckily they see an APC, but it's DOA, see?
This is just their luck, so Baird and Cole get to business fixing up their truck
They need to bolt quick, as if they bust a nut and blustered right into the middle
Of a clusterf***, while this is happening there's battling inside the mansion
Marcus regrets bringing his work home like Bryan Cranston
This is a right branston pickle, who'll provide the answers?
While the science is downloading we rely on lancers
It's time to pack your bags tighten up your do-rag
A futuristic 2Pac in a feudalistic gulag
New tactic - taking flight from the pursuit of this big Brumak
The damage is higher than the avarage price is of a new Mac

Now, act five, an act of desperation
There's a cold train coming so they head to the station
They never had the patience for a first class pass
Besides, that carriage is reserved to carry the light mass
Pulses racing, they will need to bypass the whole bloody station
To survive upon the right track
Marcus and Dom get on with Cole and Baird behind
Crap, the final chapter's not designed to happen like that!
It's time to strike back
General RAAM is going down shafted like Skywalker's right arm
Marcus sees the train is heading straight into a ridge
So he sets the light mass off and takes it to the bridge

Engine, engine, general RAAM
How do you like that light mass bomb?
When that train goes off the track
Sssskrak - a - rakk - a - rrrakkacratch one grub

Dan Bull - Destiny rap lyrics
[Verse 1] We called it the Traveller The Light that it brought us from blackness To widen, explore other planets, us A tiny fault on our planet’s surface Alive a...
Dan Bull - Gears of war epic rap lyrics
[ACT I] Emergence day emergency, thunder sounded And a hundred thousand locust rose up from underground The invasion managed to create a manic state of panic They did...
Dan Bull - Minecraft creeper rap lyrics
[Verse 1] I'm a Creeper Minecraft's Grimm Reaper Blowing up blocks like Al-Qaeda I'm not a creature that'll eat ya But I'll leave ya petrified, Peter! Reminds pee...
Dan Bull - 40 years of gaming lyrics
[Hook] When gamers came along, the planet laughed at us But this is gaming in the future and you haven't heard the last of us Dismissing this is just an enormo...