Into The Necrosphere lyrics - Broken Hope

See the full Into The Necrosphere lyrics from Broken Hope. Into The Necrosphere lyrics belongs on the album Repulsive Conception. Learn every word of your favourite song and get the meaning or start your own concert tonight :-). Rate this song's lyrics. Uploaded by Vita Stemen. Use it for personal and educational purposes only. Listen to these sick beats by Broken Hope.

Song Into The Necrosphere video 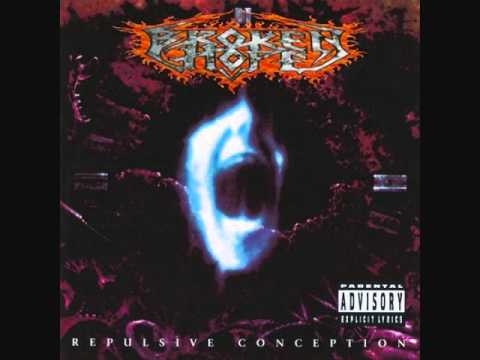 Broken Hope - Into The Necrosphere video

I work the graveyard shift, cadavers lay silently in wait
My utensils are ready to perform degrading autopsies
Through the sinews of dead flesh
And within the dried marrow of old bones
I have discovered the secrets of the dead
Mercilessly I pit out what the dead cannot hide
I become enlightened with a knowledge that makes me strong
A power I now possess launches me into the afterworld
Traveling paths in the innermost niches of putrefaction
I will become a god of suppuration in this dead domain
But to enter the putrid portal I must frantically carve
Tediously I labor over crude necropsies, bizarre necrotomy
My entire being soon liquefies as I cross over
I take on the form of foul cadaverine
Now through the perished, hardened veins I flow
Immersed into the deceased where no life resides
Except for wriggling fat white maggots filled with smegma and decay
Apparitions haunt the viscera, my presence they avoid
In terror they try so hard to hide
Disappearing into the offal of the btchered
When the dead go the way of all that is flesh
And the burdensome mortal coil is shaken off
Moving as I wish between the living and the dead
Carcasses are tenements for all spectral souls
An actual cosmos existing within a corpse
The morticians could not fathom what I see
Like a scalpel I cut my way through the necrosphere
Plunging into the deepest recesses of the carrion
They are unable to flee from my disembodied grasp
The dead scream as I infernally enslave them
Truly I am gifted, empowered with necromacy
Originating in dead matter makes me necrogenic
The interior decomposed membranes of the stiffs from a necrosphere
Which has always remained unseen by mortal eyes
Until I found the concealed secrets of the rot realm
Now I am divine, the dead now worship me
As if I am a god

Broken Hope - Captain howdy lyrics
[Twisted Sister cover: part of a "Horror-Teria" off of the album "Stay Hungry" (1984)] Oh, it's so nice to see you all inside my dreamy ...
Broken Hope - Chewed to stubs lyrics
Contined to a lightless cell, locked in solitaire Denied food and water, a cruel form of punishment Expecting me to die, I am never to be fed In thirty days the j...
Broken Hope - Dilation and extraction lyrics
Blurring the line between abortion and infanticide D & X. the most impious form of terminating tots Dilation and evacuation, such a problem for the d...
Broken Hope - Engorged with impiety lyrics
There are no boundaries for how far I will go, Caught in the clutch of a raging libido, Tongue subjected to cunnilingus, Around the rim, accidental anilingus, I live a li...
Broken Hope - Erotic zoophilism lyrics
As I pet and fondle animals, I get arosed sexually Feeling with the deepest desires to indulge in bestiality Whether it was dogs, cattle, sheep or horse Animals are...
Broken Hope - For only the sick lyrics
A universal movement begat from the dark side of music Creating images of evil, horror and worlds of death A genre for the true who strain against conformi...
Broken Hope - Freezer burnt lyrics
Intensly gelid, shivering uncontrollably in a frozen hell, As the meatlocker cold chills me to the core Locked inside an icy room, among rows of hanging ...
Broken Hope - The internal twin lyrics
Inside my fertile mother, the egg fertilized And from one egg, two individuals originated A pair of identical twins began to grow But in an unnatural quirk the e...
Broken Hope - Grindbox lyrics
Piece by bloody piece Entered into my sanguinary receptacle Your fragments turned to ground beef Bones crushed and crunched into skeletal splinters A cubicle of soul-n...
Broken Hope - Into the necrosphere lyrics
I work the graveyard shift, cadavers lay silently in wait My utensils are ready to perform degrading autopsies Through the sinews of dead flesh And within the dried...
Broken Hope - Penis envy lyrics
Surgeons implementing superior technology Using advanced lasing as a circumcising technique Intense mini-lasers used to remove baby boy's foreskins An...
Broken Hope - Pitbull grin lyrics
A beast spawned from a deadly lineage Maiming impulses descend Instilling urges to mutilate Tiny brain only programs rage Horrendous jaws bite down on y...